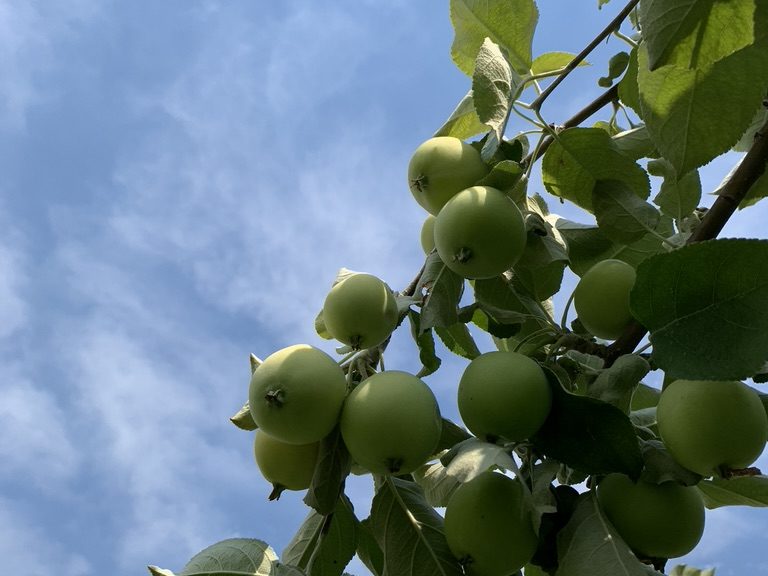 The latter half of the 1800s was a time of exploration, turmoil, risk, and considerable hardship in the Ruby Valley.  Vigilantes hunted down criminals, exacting justice; easterners came seeking uncertain fortune; and agricultural producers struggled to draw enough water during warm months in a time when reservoirs, as we know them today, were a fantasy.  All of these hardy folks shared at least one thing in common:  they were forward-thinking.

The diet of these folks was also likely considerably different from our own.  While protein sources were likely available in the form of game and livestock meat, fruit was scarce.  The idea of going to the grocery store to pick out a Sunkist orange or a Honeycrisp apple was as fantastical an idea as the concept of a 38,000-acre-foot reservoir of water.  One surprisingly common solution was to plant apple trees which can survive here and provide some breadth to the local diet.

Records indicate that one such “pomme-pioneer”, John Redfern, planted 800 apple trees in the Ruby Valley, near Ruby Habitat Foundation’s Woodson Ranch of today, way back in 1869.

Fast-forward to today and the valley is still full of forward-looking folks, taking risks and enduring in a high-desert environment, and growing food for themselves and the world. And amazingly, while apples are not grown commercially here as they may once have been, numerous ranches and homestead sites around the valley still have some of those century-plus-year-old apples, including some where Redfern planted his hopeful endeavor.  The trees are gnarled, often untended, and look like a tree-version of Mel Brooks 2000-year-old man, but they persist.

What a shame it would be to lose these trees to the ravages of time.  A windstorm, a localized fire, an accident with a piece of heavy equipment…anything could destroy the legacy of thoughtfulness these trees represent.

In an effort to preserve these old trees, as well as their unusual—by today’s standards—varieties, Ruby Habitat Foundation, using funds earmarked from a bequest to the Foundation, and with considerable help from the Western Agricultural Research Center in Corvalis, MT, set aside a piece of the ranch to grow an orchard using DNA from these links to the past.

In April 2020, we planted some 200 trees from modern root-stock in a fenced and irrigated plot of land roughly one acre in size.  This root-stock comes with some built-in resistance to some of the pests and extreme weather events. In August, after visiting some 17 old-orchard locations around the valley and harvesting DNA in the form of bud-grafts from 13 different varieties of apples, we grafted to these trees.  Just for fun, we also planted 5 plum trees toward the north end of the orchard, also using locally sourced DNA from prized plum plants.

The apple varieties we planted included Wealthy, Whitney, Transcendent, Transparent, Dolgo, McIntosh, Hibernal, Duchess, and a few others including one called Martha.  We think this last varietal is pretty special since Martha Woodson is our founder and inspires us always to look forward.

This orchard fulfills a portion of our mission which includes supporting the diversification of agricultural operations to ensure the long-term viability of working ranches.  With several standard-sized trees and about 180 semi-dwarf varieties, we hope this orchard will provide yet another beautiful spot in the valley and, eventually, perhaps in a few years, begins to yield fruit which we intend to share with the community.  If you’d like a tour of the orchard, just contact Dave Delisi.